Giant Hogweed: What You Should Know 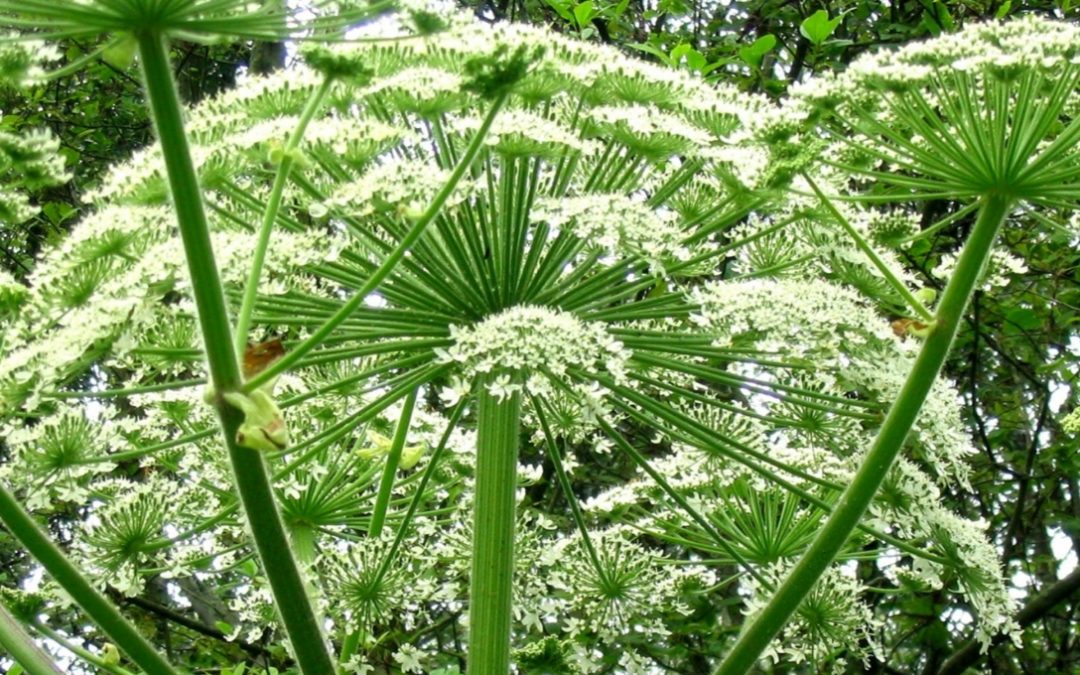 Giant hogweed, Heracleum mantegazzianum, is an invasive species that comes from the same family as, believe it or not, the carrot, but don’t expect to get your daily dose of vitamin A from this plant. Native to the Caucasus region around Russia and Armenia, the giant hogweed first spread throughout Europe before being brought over to North America bizarrely as a garden plant. Here in Ontario, we’ve been battling its presence since the Fifties, but unfortunately, we’re losing. Here’s what you should do if you encounter giant hogweed on your property.

You’ll know giant hogweed when you see it, especially if it looms over the rest of the plants in your yard. H. mantegazzianum can grow up to over five metres high and has white, umbrella-shaped flowers called “umbels”. The stems are purple in colour, roughly 10 – 15 cm in diameter, and covered in coarse hairs. The leaves that grow off them are large with jagged edges, sometimes growing as large as 1 metre in diameter. They’re not called “giant” for nothing! 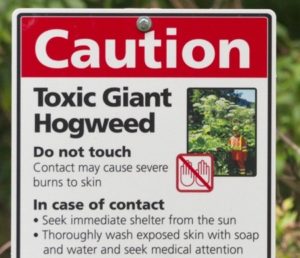 It’s a plant that can grow solitary or in the thousands, but its ability to grow in all sorts of environments and how fast it spreads makes it a massive problem. Seeds disperse through the wind and water, taking the plant far and wide. You’ll probably see them along roadsides and ditches, but also along the banks of rivers and streams (known as “riparian zones”). It’s in these areas that they choke out native life and overrun ecosystems, and they also do this near farmland, around which trees and plant life are often encouraged to grow. From these areas, the weed spreads to crops, outcompeting and choking them out, too.

What Makes Giant Hogweed A Pest?

The biggest reason everyone from the government to farmers wants to control the spread of giant hogweed: it’s a weed. Under Ontario’s Weed Control Act, giant hogweed is listed as a “noxious weed”, meaning it’s hard to control on farmland once it takes root, will harm the yield and quality of the crop and poses a threat to animals. There are only 25 weeds classified as noxious, which speaks to how bad hogweed is to the health of our agriculture.

Giant hogweed isn’t just a threat to the plants you do want in your yard; it can threaten your health and well-being, too. The 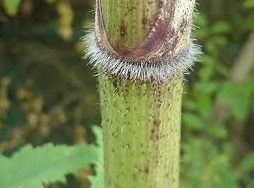 sap the plant secretes can cause phytophotodermatitis, a condition that makes your skin extremely sensitive to sunlight, which you really don’t want when you’re out working in your garden. Phytophotodermatitis (don’t worry, you don’t have to say it anymore) is a chemical reaction that can lead to blistering and burning in the skin, and it can be severe enough to scar.

If I See Giant Hogweed, What Should I Do?

You can remove it yourself, but you should take necessary precautions. Long sleeves, waterproof gloves, and eye protection should all be worn before trying to tackle giant hogweed, as the sap is clear and watery and can easily be overlooked. Ideally, you should wear a disposable covering over your regular clothes, even if they are work clothes, and tape the openings to your clothing so that the sap won’t come into contact with the skin. Carefully remove all clothing that has come into contact, and wash the gloves you used before taking them off. Keep pets far away from any hogweed you might see.

It’s a good idea to call professionals because it’s not just the sap that makes giant hogweed public enemy number one – it’s the spread of this extremely hearty invasive species. To prevent the dispersion of hogweed seeds, you can tip off your local government staff to the problem and they’ll carefully remove it for you.